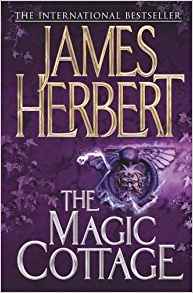 The Magic Cottage by James Herbert

“We thought we'd found our haven, a cottage deep in the heart of the forest. Quaint, charming, maybe a little run-down, but so peaceful. The woodland animals and birds couldn't have been more neighbourly. That was the first part of the Magic. Midge's painting and my music soared to new heights of creativity. That was another part of the Magic. Our sensing, our feelings, our love for each other - well, that became the supreme Magic. But the cottage had an alternative side. The Bad Magic. What happened to us there was horrendous beyond belief. The miracles, the healings, the crazy sect who wanted our home for themselves, the hideous creatures that crawled from the nether regions, and the bats - oh God, the bats! Even now those horrible things seem impossible to me. Yet they happened…” (Synopsis taken from cover)

REVIEWS of THE Magic Cottage by James Herbert

Beautifully orchestrated crescendo of suspense... Herbert had brought the shivers back to the genre. (Washington Post)