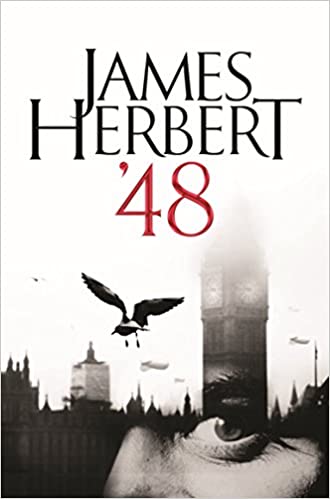 “In 1945, Hitler unleashes the Blood Death on Britain as his final act of vengeance. Hoke, an american pilot and one of a tiny minority with a rare blood group unaffected by the deadly disease, has survived alone among the debris and the dead of London for three years. Now, in '48, a slow-dying group of Facist Blackshirts believe their only hope is a complete transfusion of blood from one of Hoke's kind. Ever more desperate as their deaths approach, they're after his blood. Running for his life, Hoke is rescued by other survivors and together they're pursued in a spectacular but deadly chase through London's ravaged streets and historic landmarks, reaching a dramatic and explosive climax at the top of Tower Bridge.” (Synopsis & illustration taken from cover)

Break-neck pace . . . a story for those who like their plots exploding with excitement and fear, set against an apocalyptic backdrop. A perfect adrenalin-packed alternative to Booker Prize pretension, Daily Express