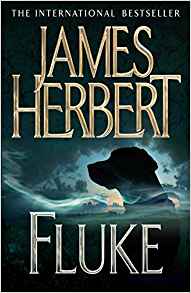 “He was a stringy mongrel, wandering the streets of the city, driven by a ravenous hunger and hunting a quarry he could not define. But he was something more. Somewhere in the depths of his consiousness was memory clawing its way to the surface, tormenting him, refusing to let him rest. The memory of what he once had been. A man…” (Synopsis taken from cover)

REVIEWS of FLUKE by James Herbert

The author has an undeniable knack for thrilling, as few other writers have . . . he sure can tell a devil of a story (Literary Review)