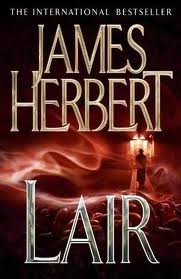 “The mutant white rats had grown and mated, creating offspring in its own image. They dominated the others, the dark-furred ones, who foraged for food and brought it back to the lair. Now the dark rats were restless, tormented by a craving they could not satisfy. But the white sluglike thing that ruled them knew. Its two heads weaved to and fro and a stickiness drooled from its mouth as it remembered the taste of human flesh…” (Synopsis taken from cover)